No Girls (Except My Sister) Allowed: The Duckling's Secret Bedroom Hideaway 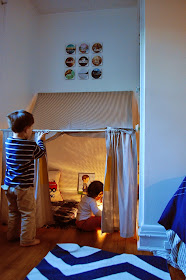 It took 3 yards of fabric, an hour of ironing and a trip to Home Depot, but I finally found something (aside from blame) that my son is happy to share with his sister - his "kids only" fabric tent, nestled in an underused corner of his bedroom whose only claim to fame until now was that it housed the door to our attic. 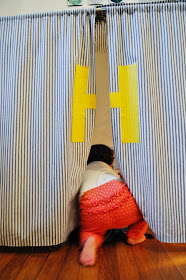 In recent months my guy has started to exert some real independence, and although he's been good about sharing his toys and books and play space with the birdie, I sensed he would love a place of his own where he could stash his growing collection of whistles and measuring tapes without his little sister trying to eat them. 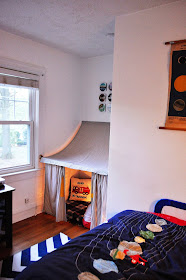 After a year of trying (and failing) to have the kids in the same room, we decided sometime around Labor Day to move the duckling into the guest bedroom, which at the time was Facebook blue and had (okay fine, still has) a miniature gothic chandelier from the previous owners.

Despite three coats of white paint and some kid-friendly art, the room still felt like an afterthought, housing our old tv stand from our Brooklyn apartment and a mauve accent chair my mother brought up from Virginia. Add in the drafty door to the attic and the room sounds pretty much like every kid's dream room, if their dream is to live in a furniture graveyard. 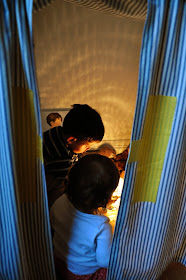 So as I thought about how to insert a little more life into the room, I honed in on the underused nook by the attic door, thinking it would make the perfect hideaway for reading, playing and the general squirreling away of things boys that boys are so fond of.  The only catch was that I still need access to the attic, so although an engineer I am not, I did come up with a solution that works, which I'll share in a separate "how to" post. 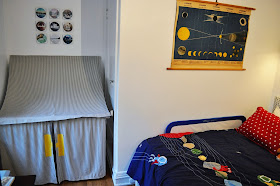 The idea of erecting a semi-permanent kid installation in his room didn't phase me, since I grew up in a house where we were always re-jiggering things and reinventing spaces to suit our needs.

For example, this is probably a good time to mention that I had a trapeze in my room growing up.

For real.  Like a "swing upside down from your knees" trapeze smack in the middle of my bedroom, which I eventually (and literally) outgrew around the age of eight.  So yeah, a few screws in the wall for an indoor fort? No big deal. 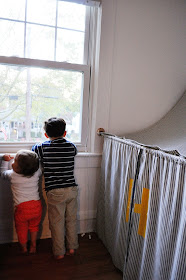 There are still a few things left to do, like add yellow pom pom fringe and weights to the edge of the canopy and make slipcovers for the cushions inside.  I'd also like to add wall-mounted wire baskets and a lantern inside to give it more of a field house feel.

In the interim, the duckling has decorated the inside of his tent himself, displaying a painting (which you can see below) that Grandmother made for him and gave to me on our most recent trip to Florida. Someone call the janitor, because there's a puddle of Mom on the floor in aisle three. He also added his fire truck pillow and an elephant lamp, and on any given day there's a pile of books (his current favorite being The Jolly Postman) and an array of stuffed animals. 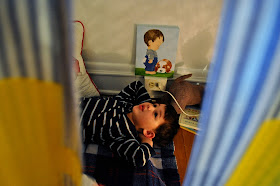 Most surprising to me is that his favorite tent accessory has turned out to be his little sister.  Didn't see that coming, but couldn't be happier. 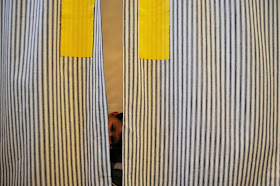 Ps - Did you notice my $1 photo project above the tent? I'm so happy I had them on hand, I think they are a great fit above his little hideout.

Pps - Tomorrow I'll have a source guide of some of the things in his room as well as directions on how I made the tent. Update: find the directions here